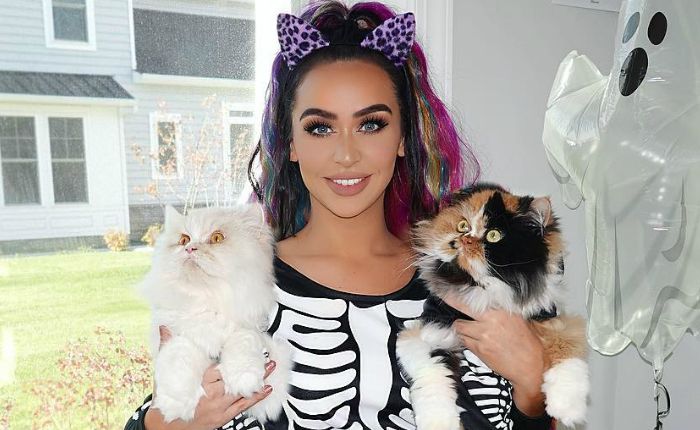 Who is Carli Bybel?

Carli Bybel is an American YouTuber, beauty and fitness vlogger, who is famous for her YouTube channels – CarliBel55 and InnerBeautyBybel. The former has over 6 million subscribers. As a makeup artist, she posts a lot of beauty tutorials, fashion and lifestyle videos on YouTube. She also owns a fashion blog called The Fashion Bybel. Arguably, she is also popular on the photo-sharing app, Instagram, on which she has over 5 million followers.

Carli Bybel was born on the 17th of October 1990, in Morganville, New Jersey, United States of America. She is currently 29 years old.

Despite Carli is very popular in the world of social media, there is very little known information about her family. She is the second child to her parents. Her mother’s name is Jody. She has an older sister named Amanda, with whom she grew up in Morganville, New Jersey.

Carli Bybel was in a relationship with fellow YouTuber and fitness guru Brett Caprioni from 2013 until 2017. They both knew each other since they were in middle grades as he was her sister Amanda’s classmate. They began dating while they were still in high school, however, their love journey didn’t last long, ending in late 2017.

Carli isn’t a part of any feature film yet.

Carli had her first TV appearance in the reality TV series, Project Runway All Stars in 2013.

The beauty and fashion guru is immensely popular on social media, with her YouTube channel ‘CarliBel55’ having more than 6 million subscribers. On the other hand, her Instagram handle has amassed over 5 million followers.

Being short with a curvaceous body figure, Carli Bybel has undergone a few plastic surgeries to enhance her glamorous appeal. In 2016, she had lip fillers injected into her lips.

Carli Bybel has done a lot of endorsement works through social media by promoting brands and products.

Without a doubt, Carli is one of the wealthiest YouTubers out there with an estimated net worth of $1.5 million. She earns loads of money from YouTube, which happens to be her primary source of net worth. She also earns a lot of money from brand endorsement and other activities. She lives in New Jersey.

As a young child, she and her sister were raised in a one-bedroom apartment in Morganville

Her parents divorced when she was in her junior year of high school and her father moved with his new girlfriend to Florida. Thereafter, she had to take care of her own expenses and she got her first job at Starbucks. Her sister also worked with her there.

She also worked as a freelance makeup artist while still doing her business degree, earning around $25 per client. During this time, she developed an interest in beauty and makeup.

Carli Bybel became best friends with Samantha Morales and it was during this time, she shifted her focus towards the online career. They decided to run their own channels.

Carli joined YouTube in 2011 and uploaded her first video titled Curl your hair with a straightener. The video soon attracted a lot of traffic and it hardly took a few weeks for her to get her first 1000 subscribers.

She has inked numerous tattoos all over her body.

She has a sweet tooth.

As an animal lover, especially Penguins, she would have ended up working at the Penguin exhibit at SeaWorld if she hadn’t pursued an online career.

On October 17, 2017, Bybel launched her own line of clothing called CarliBybelxMissguided collection.

Carli struggled with eczema, a kind of skin condition where a patch of skin becoming itchy, red, rough and cracked for a few years. She, however, managed to get it rid of lifestyle and diet changes.