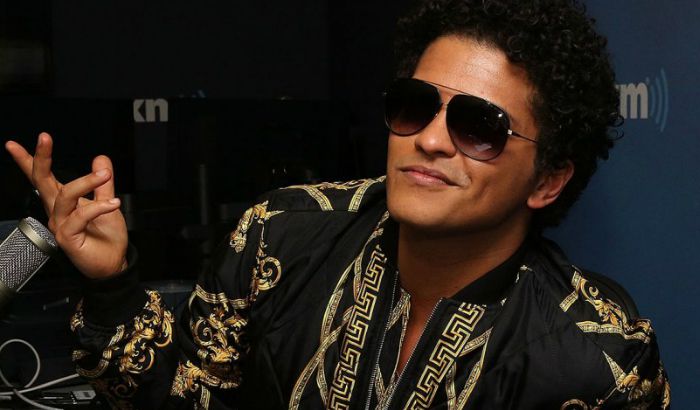 Who is Bruno Mars?

Bruno Mars is a Grammy Award-winning singer-songwriter, record producer and choreographer from Honolulu, Hawaii. He received a lot of fame for his chart-busting singles “Just the Way You Are”, “Grenade”, and “Locked Out of Heaven”. One of the most popular musicians of the decade, he has received numerous accolades including five Grammy Awards, three Brit Awards, and three Guinness World Record.

Bruno Mars was born on the 8th of October 1985, in Honolulu, Hawaii, United States of America. He is currently 35 years old.

Bruno Mars is one of six children to musician parents, Peter Hernandez and Bernadette San Pedro Bayot. His mother was a singer and a dancer, who died of cancer in 2013. His father, on the other hand, performed Little Richard rock and roll music.

He has Jewish Puerto Rican, and American ancestry on his father’s side, while he is of Filipino descent on his mother’s side.

Bruno has been in a relationship with the Puerto Rican model Jessica Caban since 2011. She is three years old than him.

His past relationships include Chanel Malvar, Rita Ora and Amelle Berrabah.

Mars’s debut studio album, Doo-Wops & Hooligans was released on 4th October 2010 which went on to reach number one on the Billboard Hot 100, as well as several other charts worldwide. The album comprised hit singles “Grenade” and “Just the Way You Are”. Before launching his solo career, he was credited with writing songs for Alexandra Burke, Travie McCoy, Adam Levine, Brandy, Sean Kingston, and Flo Rida.

He released his second album, “Unorthodox Jukebox”  in 2012. The lead single “Locked out of Heaven”  reached number one on the Billboard Hot 100 and in Canada and peaked at the top ten numbers in several music charts. So far this American artistry has released three studio albums, two EPs, twenty-two singles (seven as a featured artist) and three promotional singles.

Mars has an estimated net worth of $175 million US dollars. He makes lots of money from singing, indeed. In addition to world tours, endorsement deals, investments, YouTube earnings, music sales, royalty were among his major source of income that adds great value to his net worth.

With such immense wealth, Bruno owns a $3.3 million worth mansion in the Laurel Canyon area of Los Angeles. The luxury pad speared over 4,064 square feet of land space boasting three bedrooms and 3.5 bathrooms.

He started his music career at the age of four, performing into his family’s band, The Love Notes.

In 2011, Mars was included in Time magazine’s 100 list and in 2013 he was considered the sixth best songwriter of that year by Billboard.

In 2014, Mars became the artist with the most top-five entries on the Billboard Hot 100 since his first week on the chart.

He was arrested on September 19, 2010 on charges of possession of cocaine.

Mars is also the lead vocalist of the all-male band The Hooligans. The band is a 9-member team with guitarist, bassist, drummer, etc.

He has won 14 ASCAP awards, including three for the Most Performed Song –“Locked Out of Heaven”, “When I Was Your Man”, and “Treasure”—in 2014.

Mars was featured, along with Kodak Black, on Gucci Mane’s single “Wake Up in the Sky” issued in September 2014.

According to Forbes, Mars is one of the successful and bankable artists of the current time with estimated earnings of $39 and $100 million in 2016 and 2017, respectively.