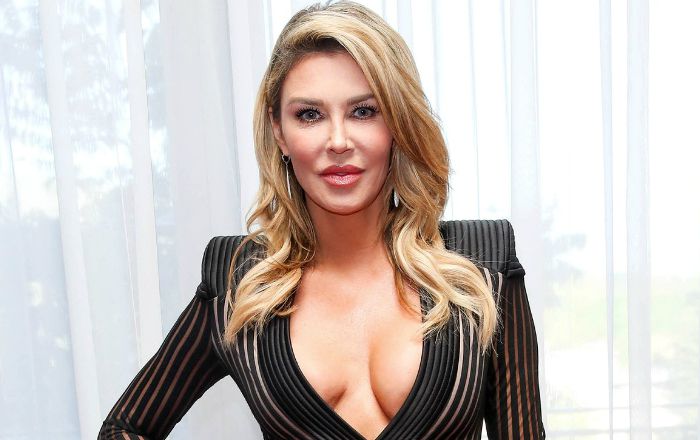 Brandi Glanville is a famous television personality and former model known for her appearance on the reality television series The Real Housewives of Beverly Hills. She also hosts a podcast called Brandi Glanville Unfiltered and has appeared on several reality shows including Celebrity Apprentice, Celebrity Big Brother (UK and US), Famously Single, and My Kitchen Rules.

She is currently 46 year sold.

Glanville tied marriage knot with actor Eddie Cibrian on May 12, 2001. The couple have two sons, Mason Edward and Jake Austin. They separated in July 209 and divorced on September 30, 2010.

In 2014, Brandi Glanville landed her role as housewife Veronica in the comedy film The Hungover Games.

She has also appeared in films such as Sharknado: The 4th Awakens and Missing at 1.

Glanville made her television debut with the reality TV show The Real Housewives of Beverly Hills from 2011 – 2015. She appeared in a total of 39 episodes.

She has appeared in a number of advertising campaigns for brands like Chanel, Giorgio Armani, Gucci, and others.

Glanville has an estimated net worth of $2 million as of 2018. She made $175 thousand per season when she was with The Real Housewives of Beverly Hills.

Talking to my esthetician Holly Cutler about friendship, the laser peel, and how she became @theskinsaint! 😍 Today on #Unfiltered! Link in Bio!

She began modeling at the age of 16 and moved to Paris to become a super model.

By the time she was 17, she appeared in the pages of Glamour and Cosmopolitan and worked for design couture houses including Chanel, Giorgio Armani, and Gucci.

Glanville competed on the reality show Celebrity Apprentice where she made it to the final four, and was fired two weeks before the finale.

She’s one of the houseguests in the inaugural season of Celebrity Big Brother (U.S.), which premiered on February 7, 2018.

Glanville is good friends with actress, and model Jennifer Gimenez.

Glanville has written two books and is a #1 New York Times bestselling author.