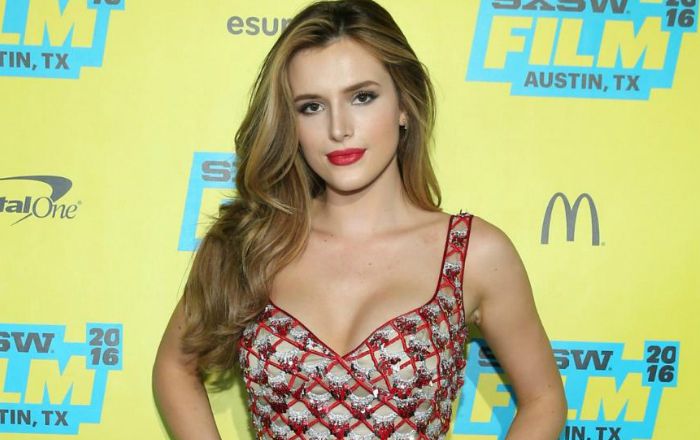 Who is Bella Thorne?

Bella Thorne is an American actress who’s immensely popular for her role as CeCe Jones in the Disney Channel series Shake It Up. This role earned her an Imagen Award and a Young Artist Award. Her other notable appearances in films include Hilary in Blended, Madison in The DUFF, Amanda in Perfect High, Holly in You Get Me and Allison in The Babysitter. She starred as Paige on the Freeform series, Famous in Love.

Start going to bed earlier! It is a tough adjustment when you have had a summer of staying up late and waking up late.

Bella Thorne was born on the 8th of October 1997, in Pembroke Pines, Florida, United States of America. She is currently 23 years old.

Bella Thorne is the youngest child to Tamara Thorne (née Beckett) and Delancey Reinaldo “Rey” Thorne. Her father, who died in 2007 in a traffic accident. She has three older siblings, Dani, Kaili, and Remy Thorne, who are also actors. She is of Italian, Cuban, Irish, English, Welsh, and German ancestry.

Bella was homeschooled because she has been constantly bullied by her peers at a public school where she previously studied due to her dyslexia condition. She also attended the Sylvan Learning center.

Bella Thorne has been in a relationship with Italian singer Benjamin Mascolo since April 2019.

She was in a polyamorous relationship with both musician Mod Sun and internet star Tana Mongeau in 2017.

Throughout her acting career, she has been subject to widespread media attention due to her dating history with many men. She had dated Garrett Backstrom, Cody Simpson, Tristan Klier, Tyler Posey, Gregg Sulkin, Charlie Puth, Chandler Parsons, Scott Disick, Lil Peep, Blackbear, and Charlie DePew.

I think that everybody needs somebody to really look up to and know that even though you’re going through a tough time, you’ll get over it.

Bella Thorne made her acting debut in 2003, playing MC Sideline’s Fan in the comedy film Stuck on You. She was credited as “Annabella Thorne” in the film.

Her first television appearance was in the American comedy-drama television series Entourage, where she portrayed the role of a kid in an episode titled “I Wanna Be Sedated” in 2006.

Throne released her debut single titled ‘Watch Me’ on June 21, 2010, peaking at #86 on the US Billboard Hot 100 charts, #9 on the US Top Heatseekers charts and earning RIAA: Gold.

Her first significant role came in 2010 with the Disney Channel sitcom Shake It Up. She played CeCe Jones, a dancer with heavy ambitions for a career in the spotlight despite having dyslexia.

Check this video to learn about her favorites

As of 2020, Bella Throne’s net worth has been estimated at $12 million dollars.

It’s not the traditional promise ring. It’s basically to always stay truthful. I think that’s a really important part of a relationship, that you’re always.

Thorne was diagnosed with dyslexia in the first grade.

As a child, Bella loved to hike, swim, snorkel, dance, and paint.

Her father died in a motorcycle accident in 2007 when Bella was just 9 years old.

Her first language is Spanish.

She voiced ant kid in the video game The Ant Bully.

Bella has appeared in more than 40 commercials. Bella was the spokesperson for Texas Instruments for 2 years.

She won a Young Artist Award for Best Performance for her role in the series My Own Worst Enemy.

Thorne is an avid supporter of the Humane Society, the Cystic Fibrosis Foundation, and The Nomad Organization, which provides education, food, and medical supplies to children in Africa.

She is afraid of snakes, spiders, and eels.

Thorne played Kate in the romantic drama Midnight Sun, based on the 2006 Japanese film of the same name. The film was released on March 23, 2018.

She came out as bisexual in August 2016.

In June 2019, Bella Thorne posted her own n*de photos on Twitter after her account was hacked by a stranger and threatened to leak her NSFW photos online.