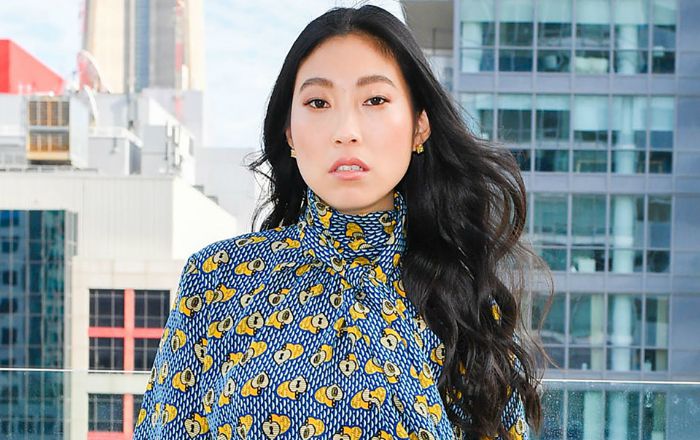 Awkwafina is an American rapper and actress who has been in the pop scene since 2012 when her song “My Vag” went viral on the internet with the music video of the song itself garnering more than 3 million views on YouTube. born as Nora Lum, she got inclined toward music from an early age. She dropped her solo album “Yellow Ranger” in 2014 that spawned hit tracks “Yellow Ranger”, “Queef” and “NYC Bitche$”. Asides musical career, she is also an actress known for her stupendous performances in movies, including Dude, Ocean’s 8, and Crazy Rich Asians.

Awkwafina was born on the 2nd of June 1988, in New York City, New York, United States of America. She is currently 32 years old.

Unfortunately, we do not have enough information about her family. Lum was born to an ethnic Chinese American father, Wally, and a South Korean immigrant mother, a painter. She was raised in Forest Hills, Queens by her grandmother as her mother died when she was four years old. Her grandmother had a major influence on her in terms of knowledge and values.

For education, Awkwafina attended LaGuardia High School, where she learned to play trumpet as well as took jazz and classical music lessons. She then enrolled at the State University of New York at Albany and majored in Journalism and Women’s Studies. She learned Mandarin at the Beijing Language and Culture University in China from 2006 to 2008.

Awkwafina prefers not to disclose anything related to her personal life to the media, so we are uncertain about her past and present relationship status.

Awkwafina dropped her non-album single “My Vag” in 2012 followed by a music video of the song in October of that year. Both the track and music video received overwhelming response from the audience turning out to be  a massive hit. The video has recorded more than three million views on YouTube.

She had her first onscreen appearance in the comedy movie, Neighbors 2: Sorority Rising as Christine in 2016.

She also has lent her voice to film characters. Her first voice role came in 2016 with the comedy adventure movie, Storks, in which she provided voice to the character of Quail.

Awkwafina made TV debut with the MTV’s series, Girl Code, in 2014.

Awkwafina has a net worth of $4 million. She lives in Greenpoint, Brooklyn, a borough in New York City.

She was raised by her parental grandmother after her mother died when she was four years old.

Her paternal great-grandfathers moved to the United States from China in the 1940s and opened a Chinese restaurant Lum’s in Flushing, Queens, and eventually settled there.

She adopted the stage name Awkwafina at the age of 16 years old. It means “definitely a person I repressed” and an alter ego to her “quiet and more passive” personality during her college years.

She worked as a intern for Gotham Gazette and Times Union and later as a publicity assistant for Rodale Books before achieving fame and popularity.

Awkwafina began rapping at the age of 13.

In 2015, Nora Lum was featured in the documentary “Bad Rap,” which also profiled some of her fellow Asian-American rappers like Lyricks, Rekstizzy, and Dumbfoundead. It was selected for an official selection at the 2016 Tribeca Film Festival.

Awkwafina released a book titled ‘Awkwafina’s NYC,’ which is basically a travel guide to New York City in 2015.

In 2017, she was honored as Kore Asian Media’s Female Breakout of the Year.

In 2018, she hosted Saturday Night Live alongside musician Travis Scott.