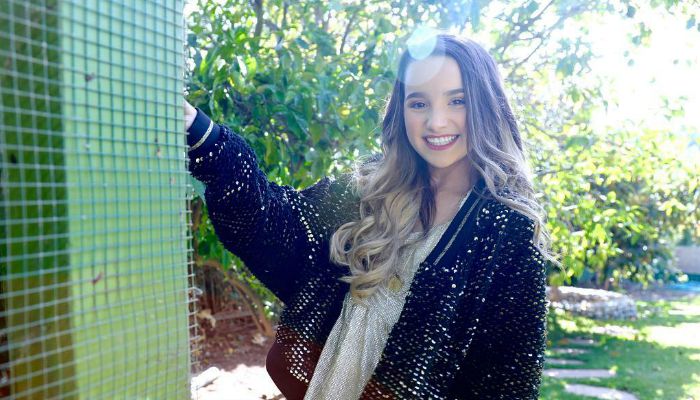 Who is Annie LeBlanc?

Annie LeBlanc is a young talented American YouTuber and gymnast. YouTube has given life to numerous teens around the world and Annie, 14, is one such girl, who caught the attention of online users when she used to accompany in their family YouTube channel, Bratayley. This rising YouTube sensation launched her own YouTube channel, Acroanna which is being managed by her parents. The channel has earned more than 3 million subscribers as of November 2018. She is also a singer and actor, who is also popular on other social media platforms such as musical.ly.

Annie LeBlanc was born on the 5th of December 2004, in Georgia, United States of America. Annie is currently 15 years old.

Annie is the daughter of Billy and Katie LeBlanc. Her father was a former US Navy personnel. She has two siblings, a younger sister, Hayley Noelle, who is also a social media star. She runs her own YouTube channel and she is popular on Instagram as well.

Annie and her sister Hayley have got trained in gymnastics for years now and they both make a lot of videos about gymnastics. She had an older brother named Caleb LeBlanc, who died in October 2015 when he was 13 years old due to a rare heart condition called Hypertrophic Cardiomyopathy.

Being an internet sensation,  Annie couldn’t able to attend regular classes, and thus she is pursuing education via homeschooling.

She is currently in a relationship with fellow social media star and actor Asher Angel. They have been dating since 2018

Annie was seen going out with fellow singer and social media star Hayden Summerall in 2017. They often worked together for videos and shows. These two broke out lately. She posted on Instagram about their breakup but she had deleted the post now.

In 2018, she was rumored to be dating fellow social media star Austin Brown, but there are no facts to affirm their relationship.

In June 2017, Annie collaborated with Hayden Summerall to release her debut single, Little Do You Know. She released a cover of the song “Fly” by Maddie & Tae on September 9, 2017, which went on to peak at #34 on the Billboard Charts in “Country” songs. She released her first single ‘”Ordinary Girl’ in the following month.

Annie’s debut pop country compilation album titled “Lollipop” was released in May 2018 on iTunes under the music label Heard Well.

Annie made her debut TV show appearance in the family show, Neon Arcade in 2015.

Annie LeBlanc is well-known for her YouTube channel, Acroanna and her family channel, Bratayley. Both channels collectively have more than 5.5 million subscribers.

Annie has featured on Nintendo Games commercial. She has a huge fan following on social media which she makes money out of her popularity by pushing brands and products through these channels.

Being a raging star at a young age, Annie LeBlanc has accumulated a net worth of US$500,000. Ad revenue and video monetizing are indeed her main source of income along with brand endorsements and sponsorship.

Annie lives with her family in a luxury house in Maryland. Obviously, she is too young to live on her own.

LeBlanc began practicing gymnastics at the age of 3. She participated in various levels of the game including 1st Class Gymnastics, Docksiders Gymnastics and Champions Gymnastics.

When her brother passed away, she wore his hoodie for several days and refused to take it off.

She has three pet dogs, Winnie, Piper, and Gigi.

She is also a part of the YouTube collaborative channel, Gymscool.

Annie was part of the YouTube series called “Chicken Girls” and its second season garnered between 2 million and 4.5 million views per episode.

In 2019, she won the Teen Choice Awards for “Choice Music Web Star.”