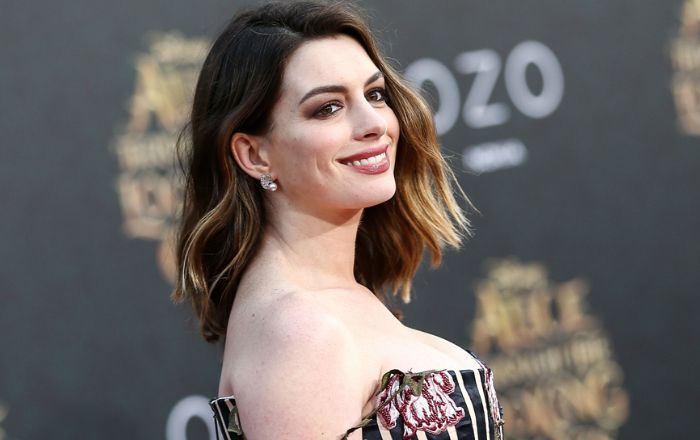 Award-wining actress and singer who gained popularity for playing the protagonist in the Disney comedy The Princess Diaries, which was her debut film, Since then, Anne Hathaway has appeared in a number of commercially successful and critically acclaimed movies as well as earned a lot ff accolades throughout her acting career. She won an Academy Award for Best Supporting Actress fro her portrayal of Fantine, a prostitute dying of tuberculosis, in the musical romantic drama Les Misérables. Her notable film credits include,  The Devil Wears Prada, Alice in Wonderland, The Dark Knight Rises, Valentine’s Day, Interstellar, and Ocean’s 8. She was named one of world’s highest-paid actresses in 2015 and she appeared in the Forbes Celebrity 100 in 2009.

Her ancestry is Irish, along with small amounts of English, German, and French.

Anne Hathaway completed her schooling at Brooklyn Heights Montessori School and Wyoming Elementary School in Millburn. She graduated from Millburn High School in New Jersey in June 2000 with the highest honors.

She then enrolled at the Women’s Studies at Vassar College in Poughkeepsie, New York where she majored in English and minored in political science. Following that, Anne was accepted into the New York University’s Gallatin School of Individualized Study.

Hathaway studied at the American Academy of Dramatic Arts in 1993 and became the first teenager admitted into the Barrow Group Theater Company’s acting program.

Anne Hathaway earned her acting credit as a lead character in Disney’s teen romantic comedy film, The Princess Diaries, based on Meg Cabot’s 2000 novel of the same name. Her role of  Mia Thermopolis was largely lauded by critics and the film was commercially successful. The success of the film led her reprise her role in the movie’s sequel, The Princess Diaries 2: Royal Engagement, in 2004.

Hathaway made her first appearance on television in FOX Network’s short-lived comedy-drama television series, Get Real, in which she played Meghan Green. She appeared in a total of 22 episodes from 1999 to 2000.

Hathaway is widely recognized for her roles in many movies. Her portrayal of a woman who deals with the guilt of having caused her brother’s death in the drama film, Rachel Getting Married in 2008, earned her several accolades, including a nomination for the Academy Award for Best Actress. Her performance as Kym Buchman in the film was well received by audience as well as appreciated by critics.

Her impeccable performance as Fantine in the 2012 film Les Misérables is easily one of the best performances in her career. She played the role of a factory worker dying of tuberculosis who struggles to raise her illegitimate child. She won the hearts of the moviegoers with her flawless performance and earned many awards, including an Academy Award for Best Supporting Actress.

Anne Hathaway has a net worth of $35 million dollars. She owns multiple properties, including an apartment worth $2.55 million in Upper West Side, a neighborhood in Manhattan, which she bought in 2016. She lives with her family in this house. Her car collection include Audi A5 and Audi R8.

She became fascinated with acting after seeing her mother performing in Les Misérables as Fantine, which was a stage production.

In early days of her acting career, her acting style and beauty were compared to the likes of Judy Garland.

Anne has a dog, a chocolate Labrador, named Esmerelda.

Hathaway has won an Academy, a Golden Globe, a Screen Actors Guild and a BAFTA Award for Best Supporting Actress for Les Misérables.

She was among People Magazine’s 100 Most Beautiful People in the world in 2010.

Hathaway has won a Primetime Emmy Award for Outstanding Voice-Over Performance for her voice role in a 2010 episode of The Simpsons.

Anne has been named in yearly lists of sexiest women by media outlets like FHM, People, AskMen, Maxim, Empire and Entertainment Weekly.