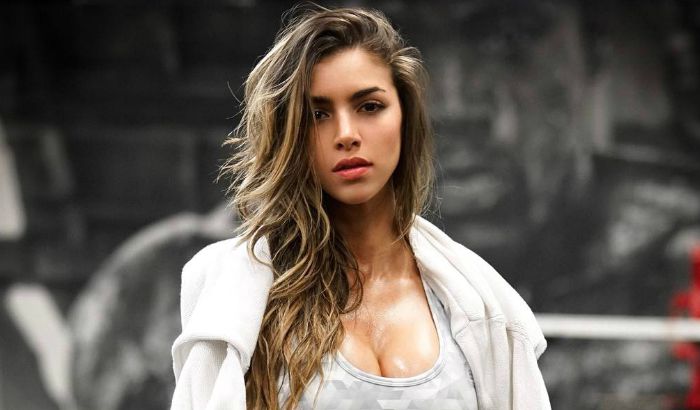 Anllela Sagra is a well-known Colombian fitness model, trainer, and bodybuilder. She is best recognized as a fitness model for her gorgeous physique, voluptuous toned body, and firm abs. Anllela has achieved huge success and fame through her fitness programs and also for being a sponsored athlete by 1Up Nutrition. Not only has she serves as an inspiration to several fitness freaks, but also a great internet celebrity, who has a whopping 9.5 million followers on Instagram as of November 2015.

Anllela Sagra was born on the 6th of October 1993, in Medellín, Colombia. She is currently 26 years old.

Unfortunately, not much is known about this gorgeous model as she has managed to keep her personal life away from the limelight. She grew up with her sister named Laura Sagra.

Anllela studied fashion at the University of Columbia.

Anllela is in a relationship with athlete and bodybuilder Tomas Echavarria since 2015.

Anllela Sagra is yet to make her appearance in films and television.

As a fitness model, Anllela has been affiliated with several sports and fitness brands and products like 1Up Nutrition.

Anllela Sagra’s net worth is estimated at $1 million US dollars as of 2019.

As a teenager, she got inclined towards fashion and aspired to become a fashion model. She studied fashion at her college to live up with her dreams, but her destiny had other plans.

Down the line, she developed an interest in fitness and starting hitting the gym since she was 18 years old. Though many of her friends asked her to stop working out as it would cease her modeling career, she continued with passion and participated in many fitness competitions.

It was her personal trainer in the gym who motivated her to take fitness and bodybuilding as her career and since then, she has never turned her back.

She owns a website dedicated to fitness training where she provides various types of fitness programs and also sells fitness merchandise, apparel, stickers, and many others.

Anllela has her self-titled YouTube channel where she posts videos related to fitness and health, which has more than 239K subscribers and over 15 million views.