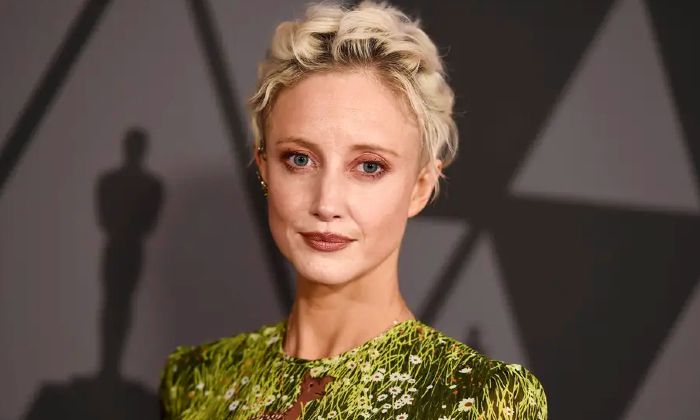 Who is Andrea Riseborough?

Andrea Riseborough is an English actress probably best known for her starring roles in miniseries such as The Devil’s Whore and National Treasure. Having got trained at the Royal Academy of Dramatic Arts, Andrea started performing on stage plays before transitioning to mainstream cinema. She has since appeared in movies like Welcome to the Punch, Oblivion, Birdman, Nocturnal Animals, Battle of the Sexes, The Death of Stalin, and Mandy, to name a few. In 2020, she began playing the role of Emma Lynwood in the drama television series ZeroZeroZero.

Andrea Riseborough was born on the 20th of November 1981, in Wallsend, England. She is currently 38 years old.

Andre’s mom, Isabel Johnson, is a secretary, and her dad, George Riseborough, is a car dealer. She grew up along with her sister, Laura, who is also an actress, in Whitley Bay, a seaside town on the north east coast of England.

She studied at the Newcastle upon Tyne Church High School in Jesmond, however, she didn’t finish her high school. Though she was academically good, she couldn’t able to concentrate on studies as she became more interested in theatre and drama.

Riseborough has been acting right from her primary school years and spent five years at the Young People’s Theatre, an amateur theatre in Newcastle upon Tyne. During her time there, she had performed in several plays, including playing Celia Fiennes in Christopher Goulding’s Riding England Sidesaddle.

She studied acting at the Royal Academy of Dramatic Art, graduating in 2005, and she is also a member of the National Youth Theatre.

Andrea dated Idaho artist Joe Appel for over seven years after meeting him at the premiere of a Woody Allen movie in Los Angeles in 2009. They decided to split in 2016 after things didn’t go out well.

Andrea Riseborough landed her first feature film role when she guest-starred in Roger Michell’s comedy-drama film, Venus, in 2006. She was cast as Dani in the comedy film, Magicians, starring comic duo Robert Webb and David Mitchell, the following year.

In 2005, Andrea made her acting debut in the television movie, A Very Social Secretary, in which she played the role of Amanda. That same year, she guest-appeared in an episode of the British medical drama series, Doc Martin, playing the role of Samantha.

According to several media outlets out there, Andrea Riseborough is estimated to be worth around $5 million. All that money she accumulated from her successful acting career.

Unlike many celebrities, Andrea isn’t a social media type. She refrains herself from using social media to the best of her abilities though she has an Instagram page with over 6k followers.

She is a huge fan of Shakespeare, who, according to her, has inspired her to become an actress.

She is a trained classical ballet dancer.

If Andrea weren’t an actress, she would like to be an author.

Andrea won the 2006 Ian Charleson Award for her roles in Miss Julie and Measure for Measure.

She starred alongside Tom Cruise in the 2013 film Oblivion.

She received her first BAFTA TV nomination for her work as a young Margaret Thatcher in 2008’s The Long Walk to Finchley.