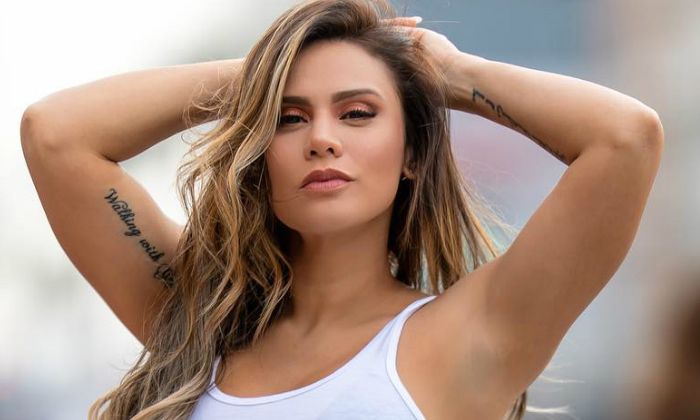 Who is Andrea Espada?

Andrea Espada is a Colombian television personality, comedian, actress, and social media influencer, who came to prominence as the host of UFC Now. With no doubt, the internet has added a lot of possibilities before creators but only a few take full advantage of it. Andrea is one such beautiful influencer who has utilized the possibilities of the internet to full potential. Despite being late to the internet game, Andrea has gained millions of followers in a short period of time on various social media platforms.

She joined Instagram back in 2015 and has amassed over 6.6 million followers, thanks to her beautiful portraits and comedy sketches. Andrea runs a family channel on YouTube called The Royalty Family that has already accrued more than 6.3 million subscribers to it. Her acting credits include parts in the City of the Deadman, Noches con Platanito, and Jack the Reaper, to name a few.

Andrea Espada was born on the 17th of August 1986, in Colombia. She is currently 33 years old.

Talking about her personal life, there’s very little to no information regarding her parents, including their names and professions and her early life. She doesn’t want that aspect of the personal matters to be in the limelight.

She attended and graduated from the Universidad Autónoma de Occidente (Autonomous University of the West) in Cali, Valle del Cauca, Colombia, with a Bachelor’s of Arts degree in International Business and Marketing.

Andrea Espada has been in a relationship with Lebanese social media star, Ali, aka 4K PAPI, since 2013. He is the stepfather to her son, Ferrari, born on July 26, 2010. In February 2020, Andrea announced that she’s five-month pregnant with Ali’s child as well as they are planning to get married anytime soon.

Furthermore, Andrea hasn’t talked much about her previous relationships and the details of Ferrari’s father are certainly unknown.

Andrea Espada relocated to the US right after her university graduation, hoping to establish herself in the show business. In 2009, she landed a small role in Gregor Habsburg’s short film Jack the Reaper, where she portrayed the character of the crash victim alongside David Moscow, Paul Vito Abato, and Cromwell Aspajo.

Besides that, she has also starred in projects such as the City of the Deadman and Noches con Platanito.

She made her television debut in 2013, hosting the short-lived game show Estrella TV presenta: Esto es Guerra on Estrella TV.

That same year, she landed a guest spot on Estrella TV’s ‘Noches Con Platanito’, the only Spanish-language late-night talk show in the US.

Although Andrea Espada has been in the show business for more than a decade and has hosted several shows, she gained mass fame and popularity only when she began hosting the UFC Network’s Spanish-language program UFC Now in 2016. Blessed with gorgeous physique, she isn’t afraid to her show off enviable figure in sexy outfits.

Besides all her accomplishments as a television personality, she is also a social media influencer, with millions of people following her on different social media platforms. She has amassed over 6.6 million people to her Instagram page @andreaespadatv, where she shares her beautiful portraits as well as her family.

Not only that, Andrea, her boyfriend, and their son, run a collective YouTube channel called The Royalty Family, which has over 6.5 million subscribers. The channel features everything from comedy skits to lifestyle vlogs. Her Twitter account has more than 320,000 followers.

She developed an interest in performing arts at a young age.

She launched her YouTube channel in April 2017 that quickly gained millions of subscribers in a short period of time.

Her channel, The Royalty Family, currently has 6.5 million people subscribed to it, while it also counts nearly 800 million views of all her videos combined.

Andrea has her own clothing line called By Drea and she serves as the brand’s designer, model, ambassador, and spokesperson.