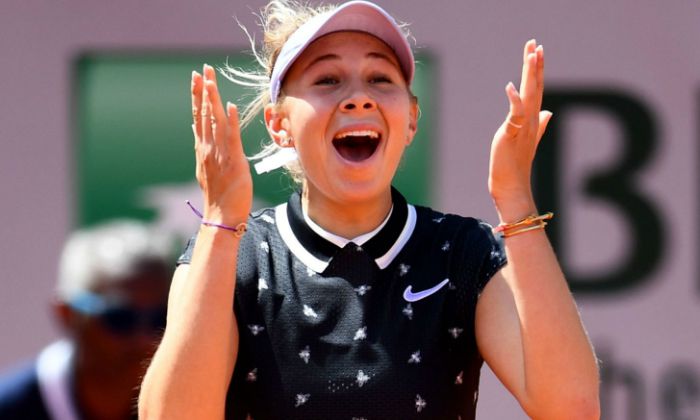 Who is Amanda Anisimova?

Amanda Anisimova is an American professional tennis player. She headlined in 2016 after reaching the finals of the Junior French Open. That same year, she defeated her counterpart American Cori Gauff at the US Open, winning her first Junior Grand Slam title. At age 17, she won her first WTA title at the Copa Colsanitas in April 2019. Amanda headlined again in 2019 after she beat the defending champion Simona Halep in the quarterfinals to become the first player born in the 2000s to reach a Grand Slam semi-final at the French Open 2019.

Amanda Anisimova was born on the 31st of August 2001, in Freehold Township, New Jersey, United States of America. She is currently 18 years old.

Amanda Anisimova is the youngest daughter of Russian immigrants Olga Anisimova and Konstantin Anisimov. Her older sister, Maria, is also a tennis player, who played tennis for the University of Pennsylvania while studying at the Wharton’s undergraduate business school. Her parents migrated to the US, a few years before she was born, hoping to give their children a better life.

Speaking about her education, she began playing tennis at the age of 2 and ever since, she has been unstoppable. Amanda achieved plenty of success at a very young age and reached a career-high ranking of No. 2 in ITF at the age of 14 years old. Information about her formal education isn’t made available to the public.

Unfortunately, not much is known about her personal life at this point of time. She is probably single as there are no reports of her dating anyone in the present or in the past.

She’s overwhelming ever since she picked up her tennis racket. Her father was her primary coach. She achieved plenty of success in her junior career. She ranked at No. 2 in the world in the ITF, her career-best, in 2016. She won the 2017 Junior US Open, as well as two other Grade A titles. She became the first American to reach the finals at the 2017 French Open girls’ singles tournament since 2002.

Amanda turned pro at age 15. She earned a wild card entry at the WTA after winning the semifinals at the Indian Wells. She reached the fourth round, becoming the youngest player to do so since 2005. The year 2018 saw her first WTA win against Pauline Parmentier. In 2018, she made it to the top 100 and also reached the WTA finals for the first time, finishing runner-up, and lost the match to Taiwanese player Hsieh Su-Wei.

She won her maiden WTA title defeating Australian player Astra Sharma on the clay surface at the Copa Colsanitas in Colombia in April 2019.

She started playing tennis at the age of 2. According to her, her sister is her biggest inspiration as she grew up watching her playing at the school and college-level tournaments.

It was because of her sister, Amanda took tennis as her profession and developed an interest in the sport.

Her family moved to Florida when she was a child.

She won her first ITF title at the age of 14 years old.

At the 2019 French Open, she defeated the defending champion Simona Halep to reach the semi-final. With that, she became the first American player born in the 2000s to reach a Grand Slam semifinal.

She speaks English and Russian.

She is a right-handed (with two-handed backhand) player.

Amanda has won one WTA and one ITF titles.