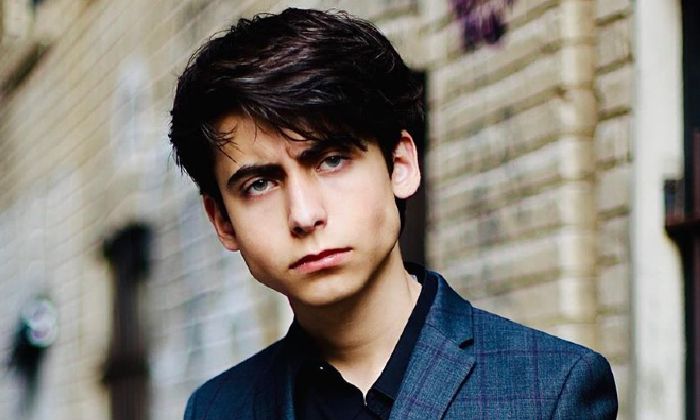 Who is Aidan Gallagher?

Aidan Gallagher is an American actor, singer, and activist who got his first break with Nickelodeon’s Nicky, Ricky, Dicky & Dawn where he played one of the quadruplets, Nicky Harper. He also appeared in two Nickelodeon television movie Nickelodeon’s Ho Ho Holiday Special and Nickelodeon’s Sizzling Summer Camp Special.

In 2019, he joined the cast of Netflix’s The Umbrella Academy as The Boy / Number Five, a boy with the ability to jump through space and time. Also an aspiring singer, Aidan has released hit singles such as “I Love You” and “For You” as well as made history by becoming the youngest ever singer solo artist to perform at SXSW in 2020.

Aidan Gallagher was born on the 18th of September 2003, in Los Angeles, California, United States of America. He is currently 16 years old.

Aidan Gallagher is the only child to his parents. Other than that, not many details have been disclosed about his family, education, and early life. He is being homeschooled as he forayed into acting at a very young age.

Aidan became interested in performing arts at an early age, thanks to his father, who was already working in the industry. During his pre-teen years, he would often visit the movie sets with his father where his father’s friends found his personality to be appealing and encouraged him to take acting as a career.

Not long after that, he had booked in an episode of Modern Family, an Emmy-winning family sitcom.

Aidan Gallagher doesn’t talk much about his personal life with the media and prefers to keep any information about his relationship status away from the public eye. He is presumed to be single. He dated actress Hannah McCloud in the past.

As I mentioned earlier, Aidan showed an interest in acting at an early age and started giving audition for television series. It didn’t take a long for him to launch his acting career. He was just 9 years old when he earned his first professional acting role, appearing in an episode of the ABC family sitcom, Modern Family, in 2013.

The same year, he had booked two acting roles, a short film starring Tyler Blackburn, where he played the younger version of David, and a pilot of the CBS series, Jacked Up, starring Patrick Warburton, which didn’t take off as a series.

In 2014, Aidan landed his first major acting role in Nickelodeon’s Nicky, Ricky, Dicky & Dawn as Nicky Harper. He appeared in the series until it was canceled in 2018.

Aidan became even more popular when he was picked up by Netflix to cast for the role of Number Five / The Boy in The Umbrella Academy, which premiered in February 2019. Certainly, this role propelled his stardom status and put him in the spotlight as well.

He has released a string of singles so far, including Miss You, For You, I Love You, Blue Neon, Time and 4th of July.

For his exceptional performance in Nickelodeon’s Nicky, Ricky, Dicky & Dawn, he was nominated for Favorite Male TV Star in the Nickelodeon Kids’ Choice Awards in 2016 and 2017. He then appeared in two television movies for Nickelodeon.

In 2018, he was named as one of the top actors under the age of 25 by Variety’s Power of Young Hollywood.

In March 2020, Aidan was named the youngest ever singer solo artist to be selected to perform at SXSW.

He is a vegan and environmental activist.

Having accomplished a lot at such a young age, Aidan Gallagher’s net worth is estimated to be around $2 million as of 2020. He had earned much of his net worth from his major acting roles in Nicky, Ricky, Dicky & Dawn and The Umbrella Academy.